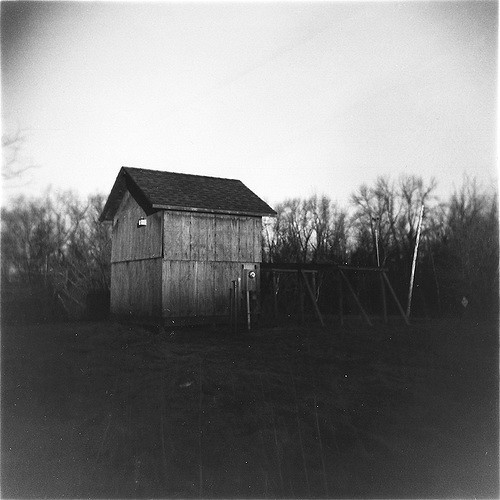 The very first human memory was a barn, she says, dry hay matted to ground, razored wooly scruff scratching ankles, a frenetic escape drenched in a frozen musk (stale), backward into a black hole that frayed the edges of her mind’s eye. That scar? That scar on the top of her foot came from the first fall into the barn, skip-trip into satan’s chilled embrace. Running for her life, running to protect something her deepest subconscious knew to be a precious thing. Her pursuer, much faster, caught her in a grab-yank at a knobby knee. Practiced child thief, he, stealer of old souls in young bodies, crook of cubs. She has no memory of anything before this night. She sees nothing but black before and nothing but darkness after. She has since been emotionally blind during her present existence. We lament that her past lives were much better, had to have been, must and should’ve been. The vodka sloshes low. We have more. She thinks she might try Vicodin tonight.

She hunches, side-eye. The tv bumbles in the living room, occupies her current lover’s attention. Volume wavers low, lower, during our most decadent logs of innocences lost: My father once tangled me in a ferocious fight, so angry that his words became spit on my person to avenge the poisoned cursing of my poisonous mother.

I like it now, that’s what I do to fight back I guess. I ask for it, special-made for me. Get rough and tumble, spit on me, I’ll say real quiet. Spit on me. You ever try that? Yeah. Spit on me a lot. Some guys won’t do it. Some guys get real nervous about hurting me. The ones who know, though, who know how to do it, they do it well.

She murmurs understanding and we mutter on about the necessity of melting into ‘the dark place’ during these encounters.

I look to my phone, wish for my army of men (reigning Admiral is a gen-u-whine spitter) to request battle. My heart feels so torn up these days, I moan to her. She only nods and breathes, long, slow, a ‘yeah’; can only try to relate to someone who does not bear a scar of repressed tragedy, only emotional and spiritual neglect; first human memory had been a bouncing fall onto museum marble. Family trip, 1990-something. Eons ago, I’m saying. Eons. For the entirety of our friendship, we muse about the conglomerate effect of spiritual abuse versus physical. Are they one and the same? Perhaps. She thinks something quite terrible happened to me. She thinks I’m repressing something very dark. I remind her of herself. At twenty-three, things did not feel right, she says. She behaved the same way as I do now, expresses herself similarly. I should seek into a deeper depth. One or two Vicodin? Two? It doesn’t affect me. I am addicted to people, not chemicals.

She rubs at the raised nub of flesh on her foot and her lips turn a grim smile at me.

Sometimes I think that she and I, we’re dark arts. Black magic. Things inhuman. We snub our noses at our peers, snarl about how ‘new’ they must be to the Universe and its injustices. We are reincarnates from too many moons ago. We are special. We are drunk.

And then a sobering happens. I have never felt such a swift cut into the atmosphere as this moment, as this exposure of her Universe. I have never felt so in love with a person of my gender, non-romantic and yet still. I have never felt so dangerously endangered next to her, powerful elixir infusion of the slightest glancings, and yes, people taste it, people want it – it? – the thing we possess together and then alone. One’s inheritance of unsafe places ruptures like a sore and spreads like lust, a perpetual tending to darkness. We befriended one another because we can see this wound on each other, can kiss it free for but a second’s respite. A laugh or two negates it completely for a moment more. Our humanity, or lack thereof, continues to strengthen.

Once pawns, now queens. A fight, tooth plus nail, for the crowns bequeathed to tired scalps. Hers: jaunty ruby. Mine: lallygagging sapphires. Diamonds for both, for anyone of this particular inheritance: shot-star-supernova bright, your name in lights honey, get it now, get what you deserve. These jewels are set into splintered bone. Her current lover does not respect these crowns. He does not understand why she is sometimes upset.

She is upset because her survival, it turns on her lately, that’s why, and you should understand something quite important, right, listen.

She and I come from unsafe places.

She trills from the kitchen, more vodka? Want more? There’s something she’s got to tell me.

This scar, she says when I return.

Places, unprotected. Places so dark that your eyes won’t ever adjust, never ever.

I look to her, and I swear I could cry as her mouth parts.

One thought on “unsafe places”